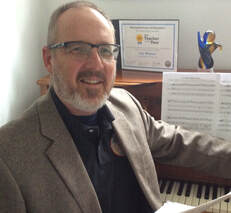 ​
​Jay Welenc was appointed to the Conductor position in 2013 and has led TIYO performances across the NW Ohio region as well as performance tours in Canada, Ecuador, Ireland, Serbia, and Hungary. Under his direction, TIYO transformed from a string ensemble to full orchestra instrumentation, welcoming woodwind, brass, and percussion players to join the strings in performing folk, pop, and light classical programming. Mr. Welenc brings decades of music education and conducting experience to TIYO having taught Band, Orchestra, Jazz Ensemble, and Choir students from elementary through undergraduate studies. Ensembles under his direction have earned numerous awards for excellence as well as acclaim from a growing number of audiences across the globe. In recent years, Mr. Welenc was named the 2018 Teacher of the Year for Ohio State Board of Education District 2, and the Buckeye Community Arts Network Classroom Hero for November 2019. He received the Maestro Award from the FOSJE National Youth Orchestra in Quito, Ecuador in 2016 and was honored by the Szeged, Hungary City Council for furthering the Toledo Sister City relationship through music in 2019. He is currently Band and Studio Orchestra Director at Toledo School for the Arts, where he founded the Studio Orchestra. Mr. Welenc holds Music Education degrees from Quincy University and the University of Iowa, as well as teaching licenses in Music Education and Career Education.

Allison Klein joined the TIYO conducting team in 2019. She is the assistant Director of Orchestras at Start High School in Toledo Public Schools where she teaches instrumental music in grades 6 through 12. Ms. Klein earned a Masters of Music in flute performance at The University of Toledo and she holds a Bachelor of Music Education with distinction from The Ohio State University. She is a jazz and classically trained flutist and cellist who has performed throughout Ohio and Europe. Ms. Klein has held leadership positions in the Toledo Federation of Teachers, Central Ohio Flute Association, has taught at the OSU Flute Workshop as well as Toledo-area music summer camps, and has developed a music curriculum map for TPS. In addition to her passion for music, she enjoys traveling and has visited several countries in Europe and spent time studying abroad in China. ​